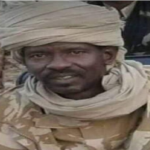 The Chadian Front for Change and Concord has announced the killing of its Deputy Head, Harun Mohamed Shetty, in an airstrike by the Libyan National Army (LNA) on the Chadian opposition sites in Tarbo area at Libya’s southern borders on Tuesday.

LNA had announced yesterday the destruction of several sites and vehicles of the Chadian opposition in the far south in an expanded military operation to end its presence in Libya, in addition to directing several airstrikes on its sites last night.