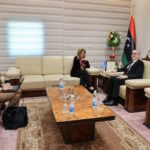 “We reiterated the importance of lifting the oil blockade as soon as possible, as well as the need to shield Libya’s national resources from instrumentalization and politicization,” she added.

It is noteworthy that the Speaker of the Libyan House of Representatives (HoR), Aqila Saleh, told US ambassador and Special Envoy to Libya, Richard Norland, in their meeting in Cairo on Sunday that the oil fields and ports will be opened after the establishment of a mechanism for distributing its revenues fairly to the regions.
Tags:Libya oilMustafa SanallaStephanie WilliamsUNSMIL

0 0
Previous : US Ambassador: I agreed with HSC President on need to support parliamentary, presidential elections in Libya
Next : Spokesman announce suspension of Parliament session until Tuesday