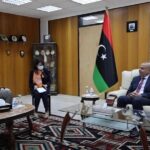 UN: Everyone must accept elections results in Libya

U.N. Envoy to Libya Ján Kubiš stressed the need for all Libyan parties to accept the results of the elections. He reportedly made his remarks during a meeting the council’s deputy chairman Abdulla al-Lafi in Tripoli, according to a statement by the Presidential Council on Sunday.

Kubiš also pointed out that Libyan court of law will decided who is legally eligible to enter the first round of the presidential race on December 24.

The U.N. Envoy revealed that he is willing to present the concerns that some Libyan parties have about the elections to the Security Council in his upcoming briefing next Wednesday, November 24.

However, he underscored that “the decision is ultimately for the Libyan people, as they are the ones who have to make the right choice through the elections.”

0 0
Previous : 593 new people test positive for Coronavirus, 15 others dead in Libya
Next : Legal experts to present judicial appeals if Dbeibeh accepted as candidate