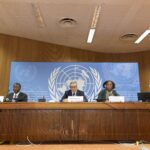 “The UN Mission fully supports the work and findings of the Fact-Finding Mission, which is critical to support Libyans’ demands for truth, justice, and accountability,” UNSMIL said via Twitter.

It also called on Libyan parties as well as member states to support the fact-finding mission mandate “through providing information and any evidence of violations of international human rights and humanitarian law.”

The Libya Fact-Finding Mission released a summary of its latest report on October 5, which revealed that war crimes and crimes against humanity including murder, torture, enslavement, extrajudicial killings and rape have been committed in Libya since 2016.

1/3 UNSMIL welcomes the UN Human Rights Council’s mandate extension of the Libya Fact-Finding Mission for nine months along with the presentation of its report to the Council at its 50th session. pic.twitter.com/tl2WWLiU7G