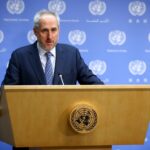 The United Nations has expressed disappointed after Libya’s House of Representative and High Council of State failed to reach an agreement on constitutional basis for holding national elections in the country.

“I think we can only be disappointed by the fact that the various Libyan factions failed to come to an agreement for the sake of people of their own country, for the sake of the millions who registered to vote, who wanted to be able to express their political opinions freely,” U.N. spokesman, Stéphane Dujarric, told reporters on Tuesday.

The talks, which stared on June 12, had sought to establish a constitutional framework for elections in Libya, but the two sides failed to agree onthe measures governing the transitional period leading to the vote.

U.N. Advisor on Libya, Stephanie Williams, called on chairmen of both chambers, Aguila Saleh and Khaled Al-Mishri to convene a meeting within 10 days in mutually agreed location to try and bridge the gaps between the two sides.

“My understanding is that there may be another meeting within the next 10 days,” Dujarric said during his press conference. “I think it’s never too late to come to some sort of an agreement, and we hope that Libyan leaders will put, first and foremost, the interests of the Libyan people at the top of their agenda.”