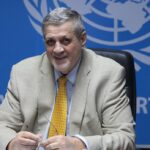 The United Nations Support Mission in Libya (UNSMIL) welcomed on Monday the launch of the voter registration for the national elections in December, which was announced yesterday by the High National Elections Commission (HNEC).

In her remarks during the launching event, UN Assistant Secretary-General, Resident, and Humanitarian Coordinator for Libya, Georgette Gagnon, said “As we all know, Libya is at a critical crossroads. After many years of conflict and division, after more than seven years without national elections, there is a new opportunity to move forward and for Libyans to exercise one of their most basic rights, the right to democratically elect their representatives and fully restore legitimacy to their institutions.”