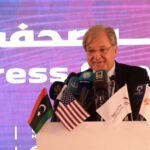 US Ambassador, Fezzan Mayors: Elections should be held as soon as possible

Date: Thursday, December 30, 2021
48 Views
U.S. Envoy and Ambassador to Libya, Richard Norland, spoke Wednesday with the Mayors of Fezzan (Southern Libya) municipalities, where they underlined the importance of holding elections as soon as possible, according to US Embassy in Libya.
“Yesterday, Ambassador Norland spoke with mayors of the Fezzan Municipalities Council from Bent Baya, Sebha, and Ubari who shared with him the importance of holding elections as soon as possible as a key to improving the conditions and quality of life in southern Libya,” the Embassy tweeted on Thursday.
It is noteworthy that presidential and parliamentary elections in Libya were supposed to be held on December 24 but were postponed due to dispute among the relevant parties.
Tags:FezzanLibya electionsRichard NorlandUSA

0 0
Previous : UN underline importance of consultations among Libyans to “chart path to elections”
Next : Deputy chief of Presidential Council in Central African Republic for trade talks