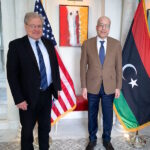 Date: Wednesday, April 20, 2022
78 Views
U.S. Ambassador and Special Envoy to Libya, Richard Norland, and Treasury Deputy Assistant Secretary, Eric Meyer, discussed with Central Bank of Libya (CBL) Governor Saddiq ElKabir on Tuesday joint efforts to enhance transparency at the CBL, especially in public spending.
Ambassador Norland underlined that, “The U.S. shares Libyan concerns that funds can be diverted to support partisan political purposes or undermine Libya’s peace and security,” according to US Embassy in Libya.
The Ambassador and DAS Meyer urged the CBL to safeguard Libya’s oil revenue from misappropriation to rebuild confidence in the institution and contribute to stability, the Embassy said in a statement.
The participants in the call jointly reaffirmed that it is critical to provide financial support for the National Oil Corporation’s operations, even as discussions continue in an effort to reach broad agreement on other government expenditures, it pointed out.
Norland also expressed concern about the shutdown of half of Libya’s oil production. “Forced, prolonged disruptions to oil production create adverse conditions for the Libyan people, including power outages, water supply issues, and fuel shortages, and damage oil infrastructure, threatening the future of Libya’s energy sector and its ability to continue generating revenue for the benefit of the people,” said Norland.
He emphasized, “Especially during the holy month of Ramadan, the Libyan people deserve regular, timely payment of salaries and subsidies to cope with rising prices as a result of Russia’s unprovoked war on Ukraine, and they deserve reliable public services.”
Tags:CBLLibyaRichard NorlandUSA

0 0
Previous : LNA representatives at JMC call on HoR and UN to assume responsibility for Dbeibeh’s government practices
Next : Williams briefs Dbeibeh on results of Libyan talks in Cairo