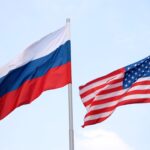 US, Russia held talks during conference on Libya

WASHINGTON – The US and Russian delegations held talks on the sidelines of the second Berlin conference on Libya as both countries see that there is room for cooperation on Libya-related security issues, US Acting Assistant Secretary of State Joey Hood told reporters on Thursday.

“We have had contact on the sidelines of this conference with all of the major players, including Russia,” Hood said during a phone briefing.

Hood pointed out that the United States sees opportunities for cooperation with Russia regarding Libya and would like to pursue them.

“I think that there is space for cooperation here – not just on the humanitarian side, but on the security side as well. I think we all have an interest in making sure that Libya is not an exporter of instability,” Hood said.

0 0
Previous : Foreign powers pledge to refrain from interfering in Libya at end of Berlin talks
Next : Libya PM, US Secretary of State meet on margins of Berlin talks