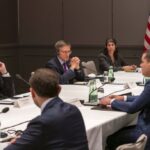 Libya PM, US Secretary of State meet on margins of Berlin talks

BERLIN – The Libyan Prime Minister, Abdul Hamid Dbeibeh, met on Thursday with the U.S. Secretary of State, Antony Blinken, on the margins of an international conference on Libya in Berlin.

The two discussed the need for timely preparations for the December 24, 2021 national elections, according to a statement by Ned Price, a spokesman for the U.S. State Department.

“The Secretary and interim Prime Minister also emphasized the importance of full implementation of the October 23, 2020 ceasefire agreement, including the immediate withdrawal of all foreign forces and mercenaries from Libya,” stated Price.

0 0
Previous : US, Russia held talks during conference on Libya
Next : Italy tries to involve US in Libya, says Draghi