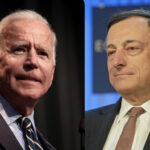 Italy tries to involve US in Libya, says Draghi

ROME – Italy’s Prime Minister, Mario Draghi, said that his country would try to involve the U.S. in Libya under the aegis of the U.N.

“The actor that h as the most cards to play does not want to be involved in that part of the world,” Draghi told the Italian Senate on Wednesday.

“It’s not as if we have no cards to play in Libya,” he continued. “We have at least as many as the other actors”.

“What we are trying to do is to urge the intervention of the U.S. under the auspices of the U.N. and at that point we can see if the US intends to be involved,” said the Italian premier.