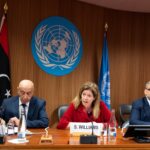 Williams: Libyan leaders love to court external actors, but blame them for failures

Stephanie Williams, the former U.N. Advisor on Libya who left office at the end of last month, stated that “Libya suffers from external interference”, which she says is courted by the country’s own political leaders.

In an article published last Thursday on the Middle East Monitor, a London-based media organization, Libyan journalist Mustafa Fetouri revealed that Williams made her remarks during a conversation with him.

During their conversation, Fetouri said that Williams has been very clear and precise about how foreign hands are, partially, to blame for the lack of progress in the country. She is in no doubt that, “Libya suffers from external interference.”

However, at the same time, she observed that most Libyan leaders “love to court external actors, to travel the world, and receive the red carpet treatment.” Yet such leaders, hypocritically, publically blame “external actors for what are in the end mostly Libyan failures” to reach the needed consensus.

Williams, who rarely spoke in criticism of Libyan politicians during her time in office, had previously accused Libyan leaders of corruption during an interview with Al-Arabiya TV Channel, which aired on July 29, just two days before she stepped down from her role.

With no accountability of her own, Williams accuses Libyan political class of corruption