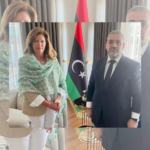 Chairman of the High Council of State, Khaled Al-Mishri, was urged by U.N. Advisor, Stephanie Williams, to “forge a final agreement quickly” about constitution draft with Speaker of the House of Representatives, Aguila Saleh.

This was publicly stated by Williams via Twitter on Saturday following a meeting with the 55-year-old council chairman in Istanbul yesterday.

The U.N. diplomat said she briefed Al-Mishri on a letter she received from Saleh, on July 21, about the appointments of sovereign positions. In his latter, Saleh threatened that the parliament will take unilateral action on choosing names for those key positions if the council did not cooperate.

Williams said that Al-Mishri believes that this issue needs to be discussed “as part of a package, the key component of which is putting the country back on a firm pathway to elections within a constitutional framework”.

Yesterday in Istanbul, I met with High Council of State President, Mr. Khaled Al-Meshri. Here are some key points from our conversation: pic.twitter.com/Br6V2CYsuX