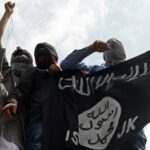 742 bodies of ISIS fighters rot in containers in Misurata

Hundreds of bodies of ISIS fighters killed in battle years ago are rotting in refrigerated food containers southeast of Misurata, Reuters reported.

The 742 corpses have started to decompose due to blackouts that cut off the electricity supply to the refrigerated containers. Even the bodies of foreign fighters whose identities have been confirmed by documents were abandoned by their countries or family members, leaving the Libyan authorities with the task of getting rid of them, according to Reuters.

Authorities planned to bury the corpses in a cemetery originally dedicated to migrants who died while trying to cross the Mediterranean to reach Europe. However, the plan was canceled because the site is not large enough.

Police running the complex say the interim government has allocated a budget to bury the bodies soon but no date or location has been announced.

0 0
Previous : Libya’s NCDC warns against a new wave of COVID-19
Next : Libyan MPs call on parliament to appoint Bashaga as prime minister