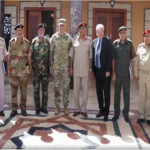 Commander of U.S. Africa Command (AFRICOM), Stephen Townsend, and U.S. Envoy and Ambassador to Libya, Richard Norland, joined on Tuesday the Libyan 5+5 Joint Military Committee’s (JMC) meeting held in Tripoli for the first time, according to U.S. Embassy in Libya.

“Today’s joint in-person meeting of the 5+5 Joint Military Commission in Tripoli joined by General Townsend and Ambassador Norland is a historic step in bringing Libyans together, particularly in the security sphere,” the Embassy said in a statement today.

“The United States remains committed to facilitating full implementation of the October ceasefire agreement, the full withdrawal of all foreign forces and fighters, as well as the full unification of Libyan military institutions,” it added.

According to the American embassy, the three discussed “developments in Libya’s security sector and how elections planned for Dec. 24 will be an important step towards Libya’s long-term stability under an elected national government and regional stability without foreign interference.”