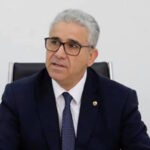 The candidate for prime minister of the Libyan new government, Fathi Bashagha, confirmed that he would not run for the upcoming presidential elections, if he assumes the position of Prime Minister, noting that any minister wishing to run would be considered resigned from his government.

Bashagha said before the House of Representatives (HoR) Monday that he waives any legal immunity for him and his colleagues in the ministry in favor the judiciary to hold them accountable for any accusation.

He continued, “It is not possible for an authority to hold the corrupted accountable while it practices corruption,” stressing that the government’s work is political, not executive.

Bashagha explained that “what Libya lacks is political reconciliation based on real participation, building our state on disciplined foundations, and unifying institutions, especially security and military, without which no one can succeed.” He praised the distinguished role of the 5+5 Joint Military Committee (JMC).