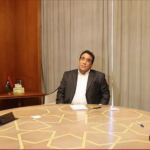 Photo Credit To Media Center for the Ministries, Bodies and Institutions of the Libyan Government
Home
National

TRIPOLI – Meeting between the President of the Presidency Council, Muhammed al-Manfi, his deputy Abdulla al-Lafi, and the Prime Minister, Abdul Hamid al-Dabaiba, held on Thursday in Tripoli.

The meeting comes after the differences that occurred between the Presidency Council and the Government of National Unity regarding the nomination of Defence Minister.

0 0
Previous : Lavrov calls for involving LNA and Gaddafi regime in the Libyan settlement
Next : LPDF must produce outcome on elections framework by end of day, says UN envoy