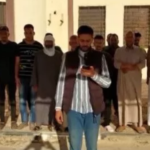 The “Oil Crescent Bloc” decided to reopen the oil fields and ports, after a blockade that lasted for more than 3 weeks, in protest against the policies of Abdel Hamid Dbeibeh’s government.

The Bloc announced, in a video statement, that it had lifted the blockade imposed on the oil facilities in response to the call of Parliament Speaker Aqila Saleh.

A spokesman said that the Bloc decided to respond to “the instructions of Aqila Saleh to open the fields from this moment.”

For his part, the Libyan Prime Minister, Fathi Bashagha, said that the efforts of the Parliament and the Libyan government to reopen the oil fields and ports were successful, after the Oil Crescent Bloc announced its agreement to lift the blockade imposed on oil facilities.