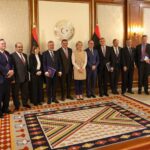 Libya’s outgoing prime minister, Abdul Hamid Dbeibah, held a meeting on Tuesday with diplomatic mission chiefs in the capital Tripoli to discuss the political situation, according to a press statement by Dbeibah’s office.

The statement noted that Dbeibah told mission chiefs that his government aims to hold elections as part of the road map drawn by the United Nations.

In response, ambassadors told Dbeibah that necessary work needs to be made to hold elections and that they strongly support U.N. Secretary-General’s Special Representative for Libya Stephanie William’s efforts to create a joint constitutional committee.