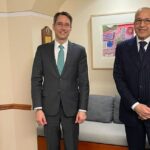 Saddek Elkaber, Governor of the Central Bank of Libya (CBL), met with Joey Hood, the Principal Deputy Assistant Secretary of State for Near Eastern Affairs, on Tuesday as part of the governor’s series of talks with U.S. officials in Washington.

According to brief statement by the Libyan bank, Elkaber and Hood discussed “cooperation programs between the Central Bank of Libya and American institutions”. They also reviewed “the difficulties facing American companies in resuming their activities in Libya”.