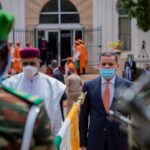 “Libya’s border with Niger are under the control and protection of the General Command of the Libyan army led by Field Marshal Khalifa Haftar,” Bazoum allegedly responded, according to Amgheib.

The Libyan lawmaker deplored the reluctance of Dbeibeh’s government to pay salaries for soldiers of the Libyan National Army (LNA), while “continuing to pay for foreign mercenaries”.