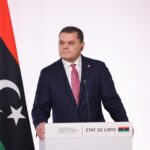 Libya Prime Minister Abdul Hamid Dbeibeh has confirmed his intention to hand over power if the elections are held “in a fair and consensual manner”.

“If the electoral process takes place in a fair and consensual way between all parties, I will hand over power to the party elected by all the Libyan people,” Dbeibeh said during a press point at the end of the Paris Conference on Libya.

There is already an ongoing dispute between the House of Representatives and the High Council of State over the electoral laws, despite the fact that High National Election Commission (HNEC) affirmed that elections can proceed with the laws issued by the House.

Reuters reported last week that the premier himself intends to run for president in the upcoming elections, which violates the U.N.-sponsored peace roadmap that explicitly prohibits him, as leader of the transitional government, from running for public office in the elections.

0 0
Previous : Turkey has reservations about troops withdrawal from Libya, says Merkel
Next : Kamala Harris: US committed to working diplomatically to promote stability and democracy in Libya