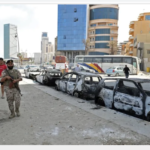 The Democratic Party, led my Mohamed Sawan, said in a statement: “It followed with great concern what happened Tuesday in the capital, Tripoli, of the insistence of the Abdul Hamid Dbeibeh’s outgoing government to resort to violence, use force to continue imposing a fait accompli and refrain from handing over power to the Libyan government mandated by the House of Representatives and its incitement and use of armed groups to ignite situation and dragging the parties to armed confrontation.

The party clarified that the solution in Libya will only be political, and through the consensus that was established between the House of Representatives and the High Council of State with a pure Libyan will, and which resulted in the issuance of the twelfth constitutional amendment and the mandate of the Libyan government, led by Fathi Bashagha.

The party denounced “the incitement by Dbeibeh against the parties’ work and their various political options, holding them legally responsible for this, surprising at Dbeibeh’s continued propaganda that his government is the only guarantee for holding elections, in light of its apparent inability to do so, and to perform its tasks in more than two-thirds of Libya.

The Democratic Party also called on “giving precedence to the language of dialogue and reason, adhering to consensus as an essential step for resolving the conflict and not to be drawn into calls for escalation and violence.”

0 0
Previous : Bashagha: We exited Tripoli after clashes and will start working from Sirte
Next : Commenting on Tripoli clashes, Turkish embassy affirm its support for HoR, HCS efforts