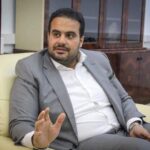 Deputy Oil Minister Rifaat Al-Abbar said on Monday that he was unaware that his ministry made a request to the Government of National Unity to form a new board of directors for the National Oil Corporation (NOC), a decision which he rejects.

Al-Abbar claimed that he made an agreement with Oil Minister Mohamed Aoun not to make a change regarding NOC without mutual consultations with each other.

The deputy minister praised the role of the current NOC board, saying that it “led the oil and gas sector, during the past years, with all success and aptitude, and enabled the oil companies to carry out their work in very difficult economic, security and political conditions”.

Aoun sought to change the NOC board, led by Mustafa Sanalla, because he considers it to be “legally invalid.” The oil minister requested the government to form a new board chaired by Tariq Al-Qatani.