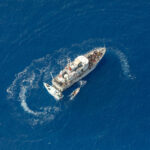 A European Union drone is helping Libyan forces intercept boats carrying migrants in the Mediterranean, who are then “hauled back to arbitrary detention and abuse”, according to Human Rights Watch.

The drone, operated out of EU member Malta, plays a “crucial role” detecting boats leaving Libya, information that the EU’s border agency, Frontex, then hands to the Libyan coastguard, the international rights group said on Monday.

Human Rights Watch, which is based in New York, said the EU had withdrawn its own vessels and installed a network of aerial assets run by private companies. It said Frontex had deployed the drone out of Malta since May 2021, and its flight patterns showed the crucial role it plays in detecting boats close to the Libyan coast.

“Frontex claims the surveillance is to aid rescue, but the information facilitates interceptions and returns to Libya… [despite] overwhelming evidence of torture and exploitation of migrants and refugees in Libya,” the non-governmental organization said in a statement.

“Frontex’s lack of transparency – they have rejected ours and Sea-Watch’s requests for information about their activities on July 30, 2021 – leaves many questions about their role unanswered,” it said.

How does a drone contribute to the abuse of migrants?

Since May 2021, the EU border agency Frontex has deployed a drone out of Malta. Frontex’s lack of transparency about the drone leaves many questions unanswered. pic.twitter.com/QIiMeV9pNr

0 0
Previous : No confirmation from Dbeibeh on who to send to Rome for treatment, Italian press report
Next : UN Security Council to discuss Libya on August 24