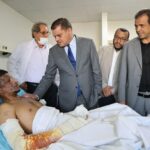 No confirmation from Dbeibeh on who to send to Rome for treatment, Italian press report

Libya’s Tripoli-based premier Abdul Hamid Dbeibeh announced on Tuesday that his government will send 15 wounded Libyans  to Italy to receive treatment for injuries sustained from fuel tanker explosion in the southern town of Bent Bayya, which took place on Monday.

The deadly incident led to the death of at least 8 people, and left more than 70 others injured. Dbeibeh promised to send 31 victims abroad for medical treatment, 15 of whom to Italy, 10 to Spain and 6 to Tunisia.

However, Italian news agency Nova reported on Wednesday that the Italian embassy in Tripoli did not receive yet the lists, passports and medical records of the patients who will be sent to Rome by Dbeibeh’s government. Nevertheless, Nova’s Libyan source stated that “this should happen soon.”

Another group of Libyans injured in the same incident were transported by the Egyptian army today from Benghazi to Cairo, where they will receive care in the army’s hospital.

Victims of Bent Bayya incident arrive in Egypt for treatment