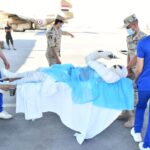 Victims of Bent Bayya incident arrive in Egypt for treatment

Dozens of wounded Libyans arrived in Egypt on Wednesday to receive medical treatment for injuries sustained from fuel tanker explosion in the southern town of Bent Bayya, which took place on Monday.

The victims were transported from Benghazi to Cairo via a medically-equipped C-130 military plane of the Egyptian army, according to a statement by the spokesman of Egypt’s Armed Forces.

At least 7 dead, over 50 injured after fuel truck explodes in southern Libya

0 0
Previous : Bashagha’s deputies hold talks with Dutch ambassador
Next : No confirmation from Dbeibeh on who to send to Rome for treatment, Italian press report