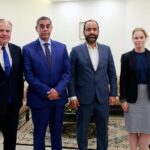 Today in Benghazi, Ali Faraj Al-Qatrani and Salem Al-Zadma, both are deputies of Prime Minister-designate Fathi Bashagha, met with the Netherlands’ Ambassador to Libya, Dolf Hogewoning, to discuss “bilateral relations between the two countries,” as per statement from Bashagha’s government.

During the meeting, the three officials discussed several issues concerning Libya, including the situation in the country’s southern region, the migration crisis and human trafficking.

The two deputies stressed upon “the importance of investment cooperation between the two countries in the presence of one stable government,” reads the statement.

For his part, the Dutch ambassador expressed “his happiness at the reception and hospitality he received in Benghazi” and offered his sincere condolences for the victims of the fuel tanker explosion in the municipality of Bent Bayya.

According to the Libyan government, Hogewoning said that his country is keen to support stability in all parts of Libya by achieving national reconciliation to reach the elections.