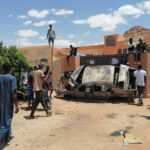 This comes in the aftermath of fuel tanker explosion that took place in the town few days, which resulted in the death of at least 8 people and more than 70 injured.

To voice anger towards the council’s handling of the deadly incident, the protestors used one of the cars that were burned in the explosion to block the council’s entry gate.

The Municipal Council of Bent Bayya had blamed current and past governments for the incident as well as the Brega Oil Company, which owns the exploded tanker.

At least 7 dead, over 50 injured after fuel truck explodes in southern Libya