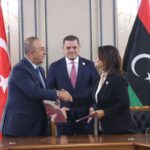 The European Union has that the newly signed hydrocarbons deal between Libya and Turkey could “potentially undermines regional stability”.

“The European Union takes note of the reports indicating that Turkey and the Libyan Government of National Unity have signed an agreement on hydrocarbons based on the 2019 Turkey-Libya Memorandum of Understanding on delimitation of maritime jurisdiction areas in the Mediterranean,” said the EU spokesperson for external affairs, Peter Stano, in a statement on Monday.

He affirmed that hydrocarbons deal “requires further clarifications since it’s based on  memorandum that goes against Law of the Sea and infringes on third states’ rights,” and added that “actions that could undermine regional stability should be avoided.”

Libya/Turkey:the reported agreement on hydrocarbons requires further clarifications since it's based on 🇹🇷🇱🇾 memorandum that goes against Law of the Sea & infringes on third states’ rights.Actions potentially undermining regional stability should B avoided https://t.co/16qLD3VTq3

The deal sparked wide controversy and angered Libyan and international actors who deemed the agreement as “illegal”. Libya’s parliament have quickly rejected deal, declaring that the Tripoli-based transitional government, led by Abdul Hamid Dbeibeh, is unauthorized to broker long-term agreements with international parties since its mandate had expired.

Parliament Speaker Aguila Saleh called the deal “illegal and unacceptable”, while the Libyan rival government of former interior minister Fathi Bashagha threatened to use the courts to annul it.

Similarly, Greece, who have had a long-running dispute with Turkey over maritime territories, came out against the Libya-Turkey deal. Greek Foreign Minister Nikos Dendias said he had spoken to his counterpart in Egypt, Sameh Shoukry, and that “both challenged the legitimacy” of the deal. Dendias said he would visit Cairo on Sunday for “consultations” on the issue.