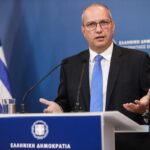 Ankara is trying to “fabricate a reality around something that is illegal” and is “ignoring the international context,” Greek government spokesman Giannis Oikonomou said on Tuesday, a day after Turkey signed a preliminary agreement with Libya for oil and natural gas exploration on Libyan soil and in the country’s maritime exclusive economic zone (EEZ).

“This is not the first time that Turkey appears to be ignoring the international context and trying to create precedents. However, no matter however often it tries to fabricate a reality with fiction and lies, it does not mean that this reality will be accepted and embraced by others. In this case, Turkey is trying to fabricate a reality around something that is illegal, and this has been acknowledged, accepted and agreed by all the major international players and international organizations,” Oikonomou told Greek state broadcaster ERT.

“Our country will react as it has a right to under international law,” he said of the deal, which defines Libya’s EEZ as that agreed upon by Turkey and the Tripoli-based government in a highly contested memorandum signed in November 2019 and denounced by Greece and Egypt, the two countries standing between Libya and Turkey.

“Don’t forget that we have sovereign rights in the area. We have an EEZ [agreement] with Egypt. What Turkey is trying to do violates the sovereign rights of other countries too and it will certainly not be approved by the international community. It will not be allowed by our country, nor by our allies,” Oikonomou said.

Asked, meanwhile, whether Greek Prime Minister Kyriakos Mitsotakis would meet with Turkish President Recep Tayyip Erdogan on the sidelines of an informal European Union summit in Prague on Thursday, Oikonomou said that Athens would “consider” the possibility, if Ankara requested it.

“Mr Erdogan has verbally assaulted this country and the Greek government, even the prime minister himself, asking Greeks not to vote for him… So, if the Turkish side reconsiders and pursues some kind of discussion, the Greek side will consider it and will, in my opinion, give a positive answer,” he said.

“The Greek prime minister has never avoided or expressed his opposition to dialogue, to a discussion with very clear positions, very clear red lines,” he added.

Relations between Greece and Turkey are at their worst in years, with Turkey issuing thinly veiled threats to invade Greece’s Aegean Sea islands. Undersea gas and oil exploration rights are a key part of the dispute.

The European Union have sided with Greece in its long-running dispute with Turkey, declaring that the latter’s agreement with Libya is “against Law of the Sea and infringes on third states’ rights.”