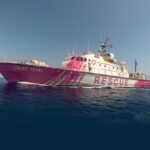 European maritime authorities and fossil fuel giant Shell were accused of complicity in sending about 70 refugees to an unsafe country today.

Civilian rescuers on board the Louise Michel, a rescue ship part-funded by British artist Banksy, saved the lives of about 101 people within Malta’s search-and-rescue (SAR) zone in the central Mediterranean on Monday night, the Morning Star reported.

The crew managed to bring 31 refugees aboard, but the remaining 70 or so climbed onto the nearby Miskar offshore gas platform, which Shell operates on behalf of the Tunisian government.

The Louise Michel warned on social media this morning that the refugees on the platform had been waiting there for over 14 hours and that the Maltese authorities, who are legally responsible for co-ordinating their rescue, were refusing to communicate.

The Tunisian navy arrived on scene in the afternoon and took the 70 refugees from the platform to Tunisia, a move the Louise Michel crew and other refugee-rescue organizers condemned as a “pullback” — the unlawful return of refugees to an unsafe place.