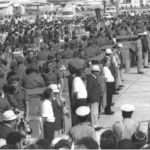 Date: Sunday, November 28, 2021
25 Views
Some 21 Israeli families of the 1972 Munich Olympics massacre victims are demanding 110 million euros in compensation from Libya over allegations of late Leader Muammar Gaddafi’s role in the attack, according to a report by German newspaper Sueddeutsche Zeitung.
The families of 11 Israeli victims are demanding 110 million euros from UN-administered Libyan funds that were frozen worldwide after the 2011 uprising in the North African country.
Families of the victims have been fighting for years to receive compensation from German authorities. At first, they were granted $1 million as “humanitarian aid” and it was not until 2002 that they received another 3 million euros, according to the Jerusalem Post.
Tags:IsraelLibyaMuammar GaddafiMunich Olympics attack