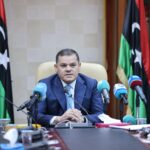 Prime Minister Abdul Hamid Dbeibeh is temporarily out of the race for the presidential elections which should be held on December 24.

Dbeibeh announced last week that he will run for president despite being legally barred by Libyan law from doing so. Current election law requires officeholders to step down three months ahead of the vote. Furthermore, the Libyan premier signed a pledge to the U.N.-sponsored Libyan Political Dialogue Forum (LPDF) before he assumed power, in which he vouched not to run for public office in the upcoming elections.

However, the High National Election Commission (HNEC) initially accepted his candidacy pending ruling by Libyan courts on any appeals presented against the decision.

Yesterday’s evening, Tripoli’s Court of First Instance accepted one of the various appeals filed against Dbeibeh. Those filed the appeal claimed that the premier is in possession of Canadian nationality, which is another violation of electoral law that bars dual citizens from running for office.

This ruling is not final because Dbeibeh is allowed to contents the appeal before the court’s Appeals Committee, which will then make a decisive ruling on whether he will be disqualified from the presidential race or not.

0 0
Previous : Families of Israeli victims demand 110 million euros from Libya over 1972-Munich attack
Next : US ambassador says he made “useful” consultations in Ankara on Libya elections