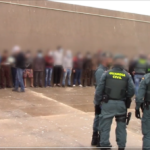 Spanish Civil Guard has arrested a shipmaster and 8 Syrians with fake papers of crew members on a livestock carrier coming from Libya.

There were 8 Syrians with fake papers on the carrier, allegedly crew members, who were arrested but recently released, while Master remained in custody. He’s accused of criminal activity of human trafficking, Maritime Bulletin reported.