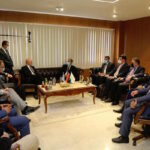 The Greek Consulate in Benghazi was officially inaugurated on Monday in the presence of a high-ranking Greek diplomatic delegation, according to Benghazi Municipality.

The delegation was received by the Head of Benghazi Municipality Council, Saqr Imran, and the Undersecretary of the Ministry of Economy for Commercial Affairs, Suhail Boushiha, the Municipality said on its official Facebook page.

The Greek delegation, headed by Deputy Foreign Minister for Economic Affairs, Franck Jans, accompanied by the Undersecretary of the Foreign Ministry for Economic Affairs, two members of the Greek Parliament, the Greek Ambassador to Libya and the Greek Consul in Benghazi, discussed many topics of common interest such as cooperation in the fields of reconstruction and trade exchange, holding joint meetings between Greek and Libyan businessmen, and activating navigation and air line after fulfilling some requirements.