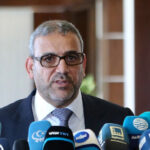 Head of the High Council of State (HCS), Khalid al-Mishri, presented a proposal to hold legislative elections on December 24 to establish a National Assembly consisting of two chambers, Senate and House of Representatives, but postponing presidential elections.

“The goal of achieving stability requires holding legislative elections first and postponing the presidential elections, for at least a year, until after the referendum on the draft constitution,” Al-Mishri said in a press statement in Tripoli, demanding the House of Representatives (HoR) to accept this postponement.

He countinued: “HCS believes that holding presidential elections in the current period will not create stability.”

“The elected assembly will be required to submit the draft constitution to a referendum within a year,” al-Mishri added.