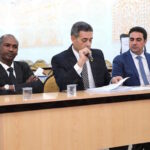 Imad al-Sayeh, chairman of the Libyan High National Election Commission (HNEC) told the  parliament on Monday that some presidential candidates forged their academic qualifications, describing the matter as “shameful”.

Al-Sayeh said some national numbers were used by some candidates without the knowledge of their owners to obtain recommendations, and HNEC is waiting for the Public Prosecutor to take measures in this regard.

“We detected scandalous fraud in the recommendations, signatures, or names of the recommenders, and excluded about 12 files,” HNEC Chair said before the Parliament in Tobruk.

He added that elements of force majeure included conflicting judicial rulings that were issued outside the legal period, and threats to the Commission if the final list of candidates was issued with certain names.

Al-Sayeh noted out that the Commission is still technically ready to hold the elections.