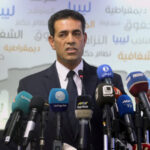 The Libyan High National Elections Commission (HNEC) issued a statement on Sunday regarding December elections, in which it referred to a “systematic campaign against it to undermine its reputation and impede its efforts to spread culture of democracy.”

This may put HNEC in danger matching the terrorist act it was exposed to on May 02, 2018, the Commission said in the statement.

“Through our follow-up to the processes of updating the voter register, we monitored on social media platforms audio recordings and anonymous writings talking about facts that are not related to the Commission’s procedures, and which are attributed to HNEC as violations in its system. When referring to those recordings and verifying the truth of their source, it was found that they were fabricated and forged ,” HNEC posted on Facebook later after the statement.

0 0
Previous : CBL Governor and HSC Head seek to pay compensations to Turkish companies
Next : High percentage of COVID cases and severe shortage of oxygen in Jado west of Tripoli – Official