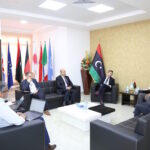 This came during a meeting between HNEC Head, Imad al-Sayeh, and the UNDP Resident Representative in Libya, Marc-Andre Franche, HNEC said in a statement.

The meeting, held at HNEC headquarters in Tripoli, discussed the developments of the electoral process and the operational progress made by the Commission to hold the presidential and parliamentary elections simultaneously, and the accompanying momentum in terms of the interest and aspirations of the international community towards Libya’s stability, the statement explained.