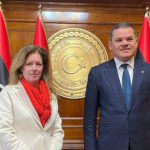 Prime Minister of the Libyan Government of National Unity (GNU), Abdel Hamid Dbeibeh, discussed Sunday with the Special Adviser to the Secretary-General of the United Nations in Libya, Stephanie Williams, the current political developments in the country.

During the meeting, held at the Cabinet Office in Tripoli, Dbeibeh stressed the need to complete the road map approved in Geneva, and the responsibility of all parties to create the appropriate conditions for holding national elections and holding a referendum on the constitution during this year.

He also made it clear, according to GNU statement, that he had discussed during the past period with political actors and many different parties, to develop a plan with a specific time frame to achieve the national entitlements included in the road map adopted at the Libyan Political Dialogue Forum (LPDF) in Geneva.