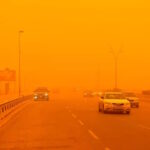 In wake of dust storm in Tripoli, EU calls on authorities to consider climate change

The European Union Delegation to Libya has called on the Libyan authorities to consider climate change and plan to mitigate its severe effects on the country, in the wake of the dust storm in Tripoli today.

The Delegation said in a statement that “Tripoli woke up today to a dust storm that reminds us of climate change and its consequences that will change life as we know it.”

EU Delegation noted out that Libya is considered one of the countries most affected by the climate disaster and rising temperatures.