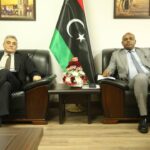 Katti made the appeal during a meeting with Italian Ambassador to Libya Giuseppe Buccino in the capital city of Tripoli, according to a statement issued by the Libyan Foreign Ministry.

Katti stressed the need for the Italian companies to return and resume major construction projects in Libya, including a highway connecting eastern and western Libya as well as the rebuilding of the Tripoli International Airport that was destroyed by armed conflict in 2014.