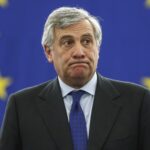 Italy: Refugee camps can be set up in Libya similar to ones in Turkey

Refugee camps, similar to the ones in Turkey, could also be in Libya and other countries where migrants leave for European shores, Italian Foreign Minister Antonio Tajani told the press on Sunday.

This was reported by Italian news agency Nova, which also stated that Tajani is “in favor” of strengthening the 2017 memorandum of understanding signed with Libya on the fight against illegal migration, human trafficking, smuggling and the strengthening of border security signed.

Tajani reportedly said that he “talked at length on the subject” with Libyan Foreign Minister Najla Mangoush during a telephone conversation last Monday, 7 November.