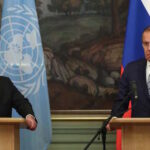 Lavrov meets Guterres to discuss “some sensitive issues”, including Libya

The Russian Foreign Ministry said that Foreign Minister Sergei Lavrov will hold talks with United Nations Secretary-General Antonio Guterres, who will arrive in Moscow on a working visit on Tuesday.

The interlocutor will also be briefed on the progress of the special military operation carried out by Russia in accordance with Article 51 of the United Nations Charter. It is also scheduled to address a number of sensitive issues on the international agenda, including Syria, Libya and the settlement in the Middle East.

The Foreign Ministry added that the talks will focus in particular on Russia’s unwavering support for the activities of the United Nations and the provisions of its charter, as well as the central coordinating role of the world organization in global affairs. In addition, the two sides will discuss the possibilities of developing fruitful cooperation between Russia and the United Nations Secretariat.