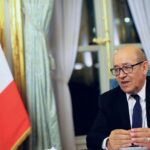 The international conference on Libya, to be hosted by France on November 12, will focus the withdrawal of foreign forces from the country, French Foreign Minister Jean-Yves Le Drian told the press on Sunday.

Speaking to Al-Arabiya channel, Le Drian welcomed the issuance of the presidential election law by the House of Representatives, which he described as “an important progress”. He emphasized that the Libyan general elections must be held on December 24 as outlined by the UN-sponsored peace roadmap.