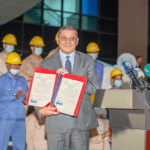 Libyan Prime Minister, Abdul Hamid Dbeibeh, has approved the construction of an oil refinery and cooking gas plant at Sharara field in Ubari town in the Southern region (Fezzan), according to Hakomitna platform of the Government of National Unity (GNU).

The project will be implemented by Zallaf Company and aims to provide fuel supplies to the southern region at a lower financial cost, said the Chairman of National Oil Corporation (NOC), Mustafa Sanalla, during the inauguration ceremony of the project.

Sanalla stated that the refinery is ready and would be transported to be installed on the site, expecting that it would be installed in a very short period.

The cost of establishing the project is between $500-600 million, while its net profit is $75 million annually; Therefore, the capital is expected to be recovered within 7 years, according to Zallaf’s Chairman, Hussein Abu Siliana.