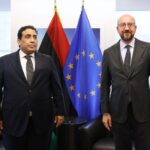 Mohamed al-Menfi, chairman of Libya’s Presidential Council, held a meeting in New York yesterday with Charles Michel, president of the European Council, to discuss the European Union’s support for the Libyan elections on December, according to a statement by the Libyan council.

The two leaders also discussed the latest developments in Libya during the meeting, which took place on the sidelines of the 76th U.N. General Assembly.