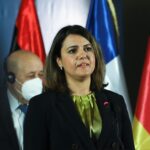 Libya won’t be base for destabilizing region, says foreign minister

Libya will not be a base for any foreign country seeking to destabilize the region, said the country’s Foreign Minister, Najla al-Mangoush, on Thursday.

Speaking during a press conference in Tripoli with James Cleverly, UK’s Minister of State for Middle East and North Africa, Mangoush added that her government “appreciates Britian’s readiness to put pressure on countries interfering in Libya”. The Libyan minister also called on the international community to unify its position on Libya.

0 0
Previous : Libya’s PM to visit UK ahead of 2nd Berlin Conference
Next : No presidential bid announced by Haftar until elections legal framework is set, says spokesman