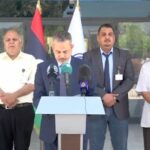 Workers at Libyan oil and gas sector expressed their dissatisfaction and complete rejection of statements of US ambassador Richard Norland and UN advisor Stephanie Williams and “their blatant interference in the management of the oil sector in Libya,” pointing out that this is considered a violation of the state’s sovereignty and independence.

The Libyan General Petroleum Union said in a statement that “the National Oil Corporation (NOC) is a Libyan governmental institution, and no foreign party has the right to interfere in its management or exercise guardianship on it.”

The statement indicated that “no foreign official, regardless of his/her capacity and position, has the right to interfere in the matter of changing the board of directors of any national institution.”

The Union affirmed its rejection of any foreign interference in its affairs, expressing its trust in the new board of directors for NOC.

It explained that the change of NOC board of directors came within the framework of correcting the legal status of the board of directors, which was suffering under the exceptional circumstances that Libya experienced in the past years.

For its part, Oil Ministry of the Government of National Unity (GNU) expressed in a statement Friday its rejection of “the attempt by Stephanie Williams to impose a foreign vision on the Libyan state’s management of the oil sector, “which represents an infringement on the sovereignty of the country,” in response to Williams and Norland statements, considering that “their positions do not support Libya’s contribution to the stability of the global oil market.”

Norland had stated that the United States was closely following court proceedings regarding changing the NOC board of directors and encourages Libyan actors to allow judicial authorities to carry out their duties without interference.
“The NOC’s independence, and apolitical status in recent years is a legacy that should be maintained to sustain Libya’s reputation in the international oil sector,” he pointed out.
“We are paying particular attention to the status of NOC subsidiaries and any attempts to appoint unqualified representatives to the boards,” Norland said.
Tags:Libya oilNOCUNUSA